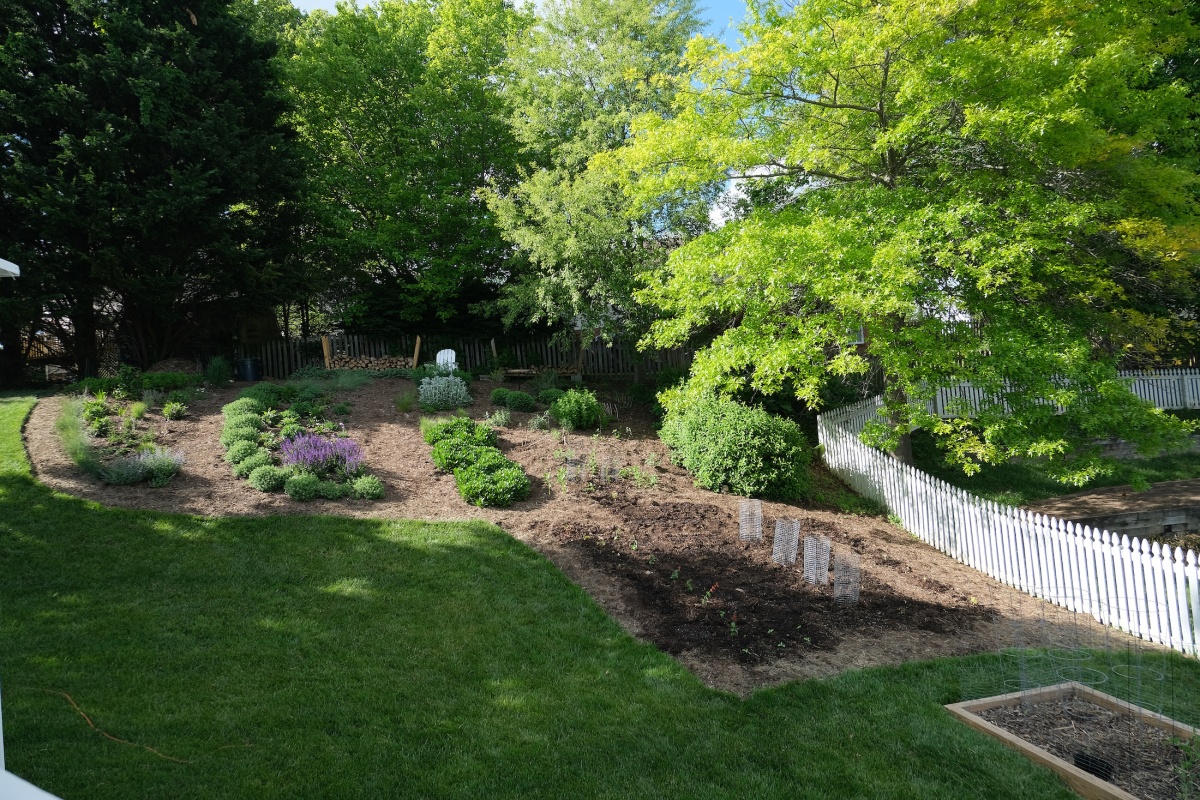 I killed grass back in February to create a new flower bed. I wanted to fill it with lots of nectar and host plants for butterflies, plus some herbs and peppers for eating. I mulched the bed in the end of March, and in May, I’ve planted it:

It doesn’t look like much for now, which is why I wanted to photograph it, as a before picture. The wire cages are to keep the rabbits away from the milkweed seedlings. The’ve eaten fresh milkweed in the past, and I don’t want them eating these seeds I’ve carefully cultivated for 10 weeks. 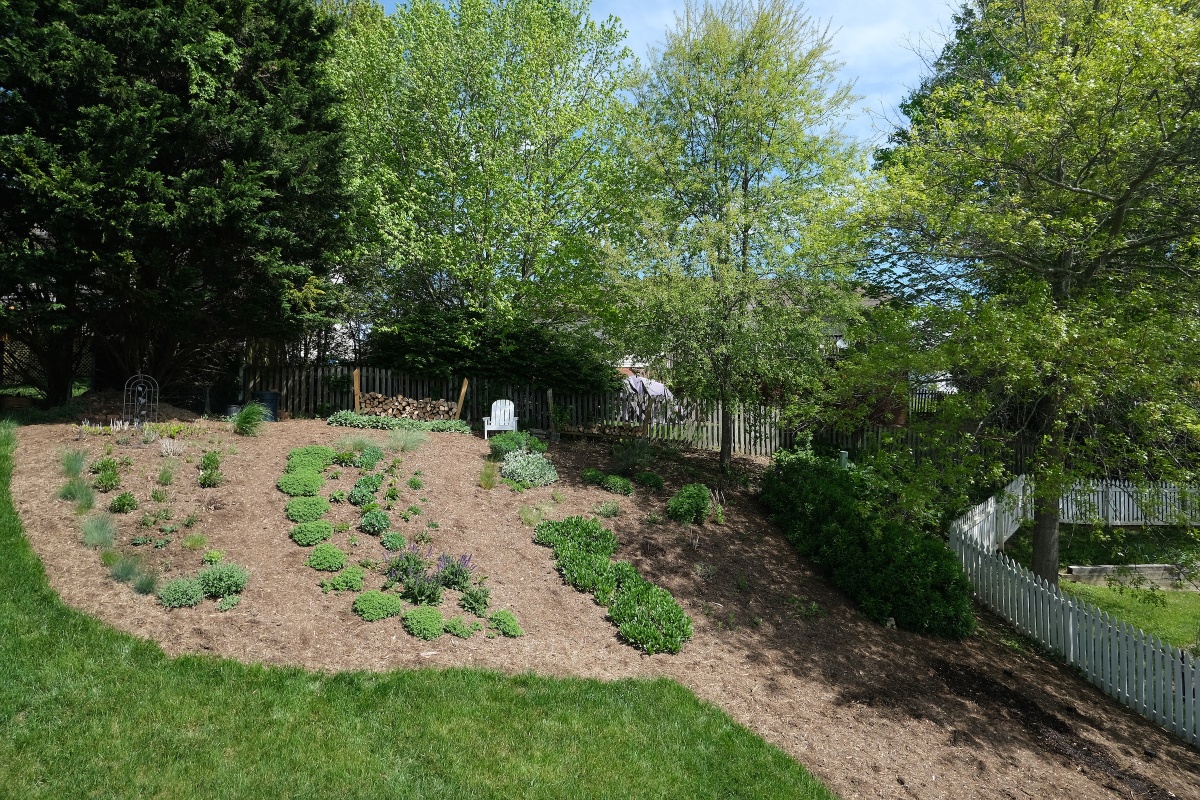 The oak tree suddenly has leaves, and the salvia are blooming. The blossoms of tulips, dogwoods, and redbud begin to fade, but the yarrow, dwarf lilac, roses, rue, and scabiosa all have flower buds. The orlaya came back and its buds are opening, too. I see the beginnings of flower buds on a few echinacea, and a nepetas’ blue blossoms sprinkle the air above their silvery green leaves.

I put in a passionflower today, along with 3 blanket flowers and 2 scarlet and orange milkweeds. I’ve got my fingers crossed for the passionflower. I hope it will last. Once I decided to kill more grass, I called my mulch guy to ask if they delivered top soil. He said yes. I got excited, and I asked him for three cubic yards, as soon as possible. That was two weeks ago. A snow storm was on its way at the time, and his dirt was still wet from the last snow. “I’ll call you when the weather is okay to deliver,” he told me.

Thursday afternoon, I was on a run on our second consecutive warm, sunny day — the first sunny days in what seemed like weeks. My phone rang when I was about 10 minutes from home. It was my mulch guy, so I stopped to walk, and panting, I answered the phone. Maybe he could deliver that day!

“Hi! I’m calling about your top soil, the weather finally is clear – ” he said.

“We’re about to get another six days of rain -“

“Can you deliver it today?!” I said. In my excitement, I kept interrupting him.

He delivered it in the late afternoon. I covered it with a tarp as the sky clouded over. With six more days of rain on the way, I wondered when I’d get a chance to spread it. If only I could get the cardboard down and the dirt on top of it, the rainy days would be perfect to water it in and get the cardboard good and soggy so that it will start breaking down at least a little bit before I want to start planting. With potted seedlings, I can dig through the cardboard for their roots to get into the earth. I’m worried about sowing seeds though; if the cardboard is still too stiff and new, and I sow seeds in the dirt on top of the cardboard, their new roots won’t be able to penetrate it. The sooner I can get the cardboard over the grass to kill it, and under the dirt and rain to start breaking down, the better chance my seeds will have.

Yesterday, I couldn’t stand not taking advantage of the coming wet weather. So despite gross gray skies, rain, and a constant drizzle, I decided to go ahead and lay down the load of cardboard I’d collected from a nearby recycling dropoff. The soil was sodden and heavy, and I’m lucky I didn’t throw my back out as I shoveled, wheeled, dumped, and spread. It was pretty grueling work, and I was glad when I was done. Today, I sip coffee at the window and watch with glee as rain soaks my work.

I need maybe one more load of cardboard to finish off the area for my bed. Hopefully by the time I get to that final load, the soil will be drier. And spring will be that much closer by then! 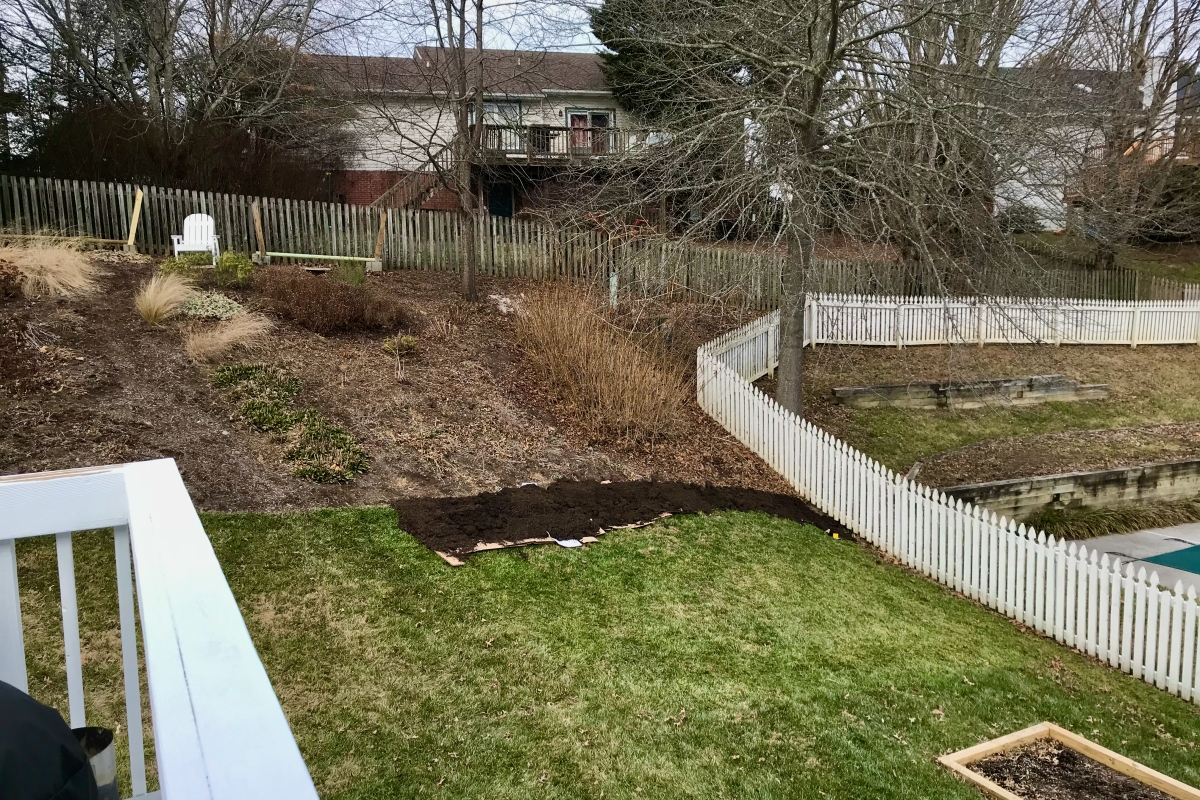 At the end of every summer, I think, cool, the garden is good. It looks great. I will leave it as it is; I won’t obsess during winter or move a bunch of stuff around in the spring.

Then January comes. I order seed catalogs. I pace. I look out the windows. This year, I started a journal — with drawings! — to help me see the garden’s beauty even when the colors are just a dozen shades of brown.

As I looked at seed catalogs and paced and looked out the windows, I thought, you know, I really want a big swath of Mexican sunflowers. And a giant patch of zinnias for the butterflies. And I really want more milkweed, too, and dill.

But all the beds are already full.

So I paced and looked out the windows more. I looked for a place a bed could go. A place with sun and that I could reach with the hose and that was somewhat level so the tall Mexican sunflowers wouldn’t flop down the hill when they could no longer bear up under their own weight.

There’s a big section of one flower bed that gets too much shade in summer for me to grow the things I want in it, but I realized if I pull it down a bit, I can create some space that gets more sun, is less steep, and would be a perfect place for a big flower patch.

We still had a bunch of cardboard boxes left over from Christmas, so on a warmish day (for January — it was maybe 45 ℉), I set the lawn mower on its lowest setting to shear the grass close to the ground in the area I want to transform into a bed. I broke down the cardboard boxes, spread them out, and weighed them down with bags of topsoil.

My idea is that if I start now, I can create a physical barrier between the grass and the sun to kill it. Meanwhile, I’ll cover the cardboard with topsoil to weigh it down. The topsoil will also provide dirt to scatter seeds directly into come May when it’s time to sow zinnia seeds. I’m hopeful the next three months of snow and rain will soften the cardboard enough that by the time June gets here and the zinnias are sending down roots, they won’t hit an impenetrable barrier.

This is all very much a fly by the seat of my pants idea, by the way. I’m pretty sure it will work.

However, I fear it will only work if I get started, like, now. As soon I exhausted our cardboard supply, I plotted when I could put more down. I had time off scheduled today, and I thought, awesome, I’ll do it then!

And then this happened.

Which means the area I wanted to work in today looks like this.

Now, instead of laying more cardboard down, I’ve decided I should extend the bed even further, all the way around the raised bed, because why not? I can put in some sugar snap peas.

I couldn’t work out there today, but after a coworker inspired me with his compost delivery, I did put in an order with my mulch supplier for dirt to be delivered next week or the week after, depending on the weather. That gives me two weeks to scrounge up more cardboard, and hopefully not come up with more ideas of where to kill lawn. I don’t know how my back will handle shoveling this much more mulch in spring. 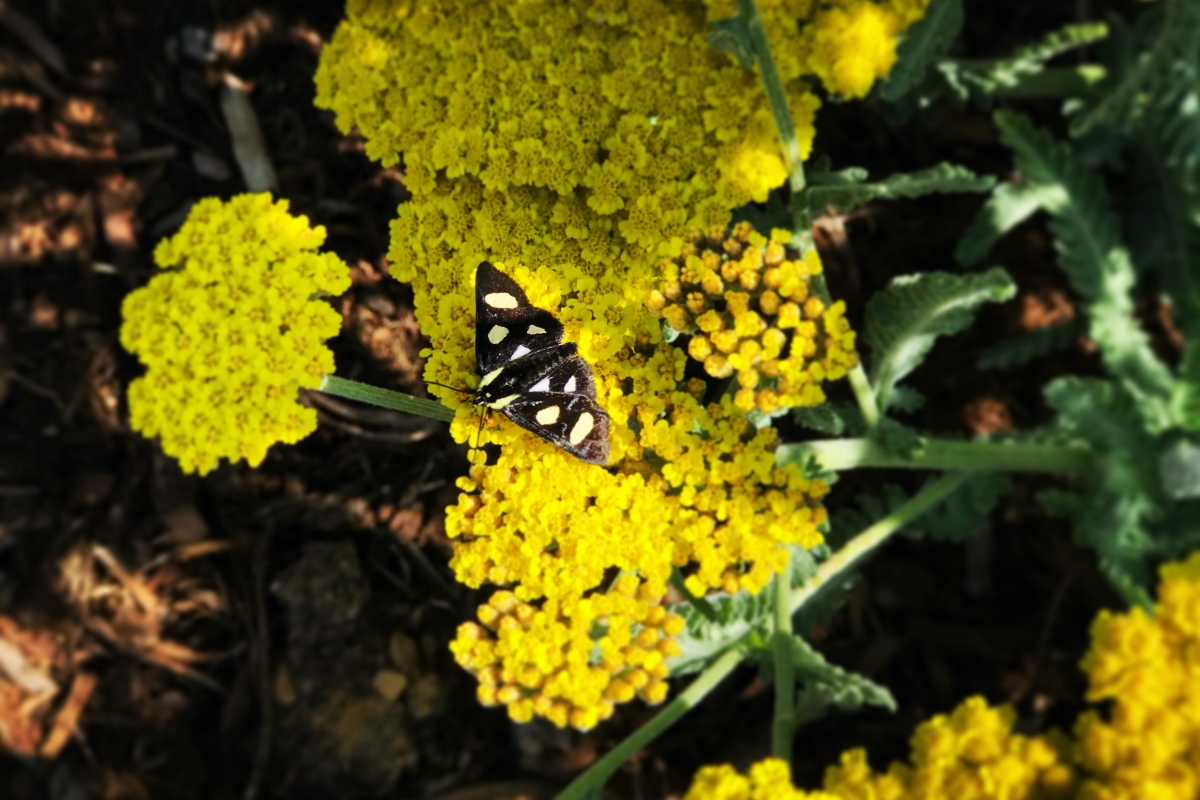 It was warm enough today that I was able to take my laptop outside and work from the garden. Before I settled down with my afternoon coffee and the rest of the day’s work, I took a walk around the garden to check on what’s coming in and what’s blooming.

The sun shone bright today and the temperature reached 80℉. I saw multiple butterflies skitter through the garden: a swallowtail, a monarch, a cabbage butterfly, and an American Painted Lady that actually stopped for a drink.

The salvia and a couple of other herbs are blooming now — rosemary and thyme — while everything else begins to bud. This is always an exciting time that makes me walk the garden and check on everything’s progress every day.

Andrea Badgley is a mom, wife, and creative nonfiction writer at Butterfly Mind. She grew up on the coast of Georgia and now lives with her husband and two children in the Appalachian mountains of Virginia.